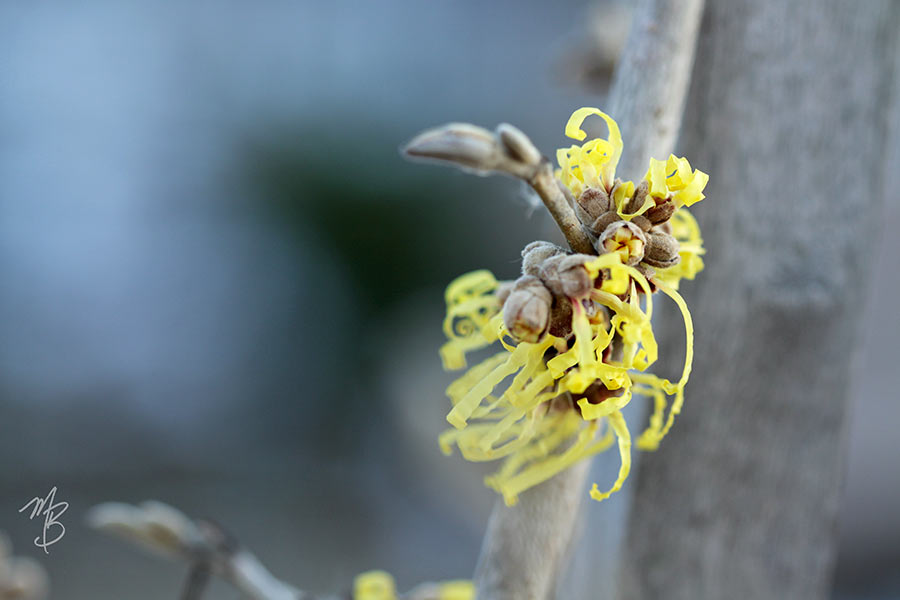 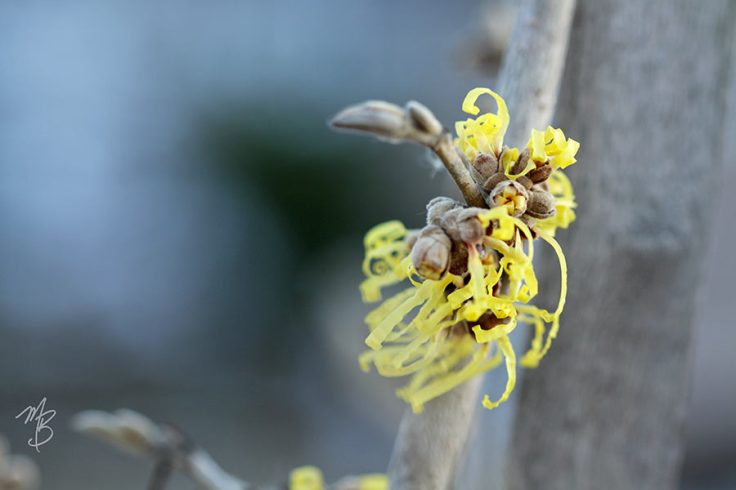 Mary Beth: I have been avoiding the gardens for the last few months and with good reason; they are a mess! I didn’t do any fall clean-up this year — makes me squirm just admitting it.

There are piles of leaves and debris everywhere that never quite got to the compost. Worse still is I almost talked myself out of digging up the beautiful dahlia tubers I’ve grown for the last 5 years. Luckily, I was so overwhelmed with guilt that I ran out and pried them out of the ground just before the freeze. As I packed them up, I grumbled “Why bother, I won’t be here.” (Regular readers will remember that my husband and I are moving back to Colorado, though we’ve postponed our move from December to April.)

I’ve been staying out of the garden since the last rose bloomed; trying to detach myself I guess. But now the whispering and the nudging starts, and I think about the witch hazel we planted in the far end of the garden in memory of my father. It’s just around this time of year that the witch hazel starts to slowly unfurl its lemon zest petals. So I pushed through the garden gate, ignoring the cold as I stepped over the discarded vegetable plants that I’d carelessly tossed in the paths last fall. I’ve only come here to see the witch hazel, to see if it’s in full bloom yet.

But something has been happening during these visits. With each new bright, crinkly lemon-colored bloom my cold indifference seems to be melting away. Slowly I gaze around thinking about what the new season will bring and about the work I know I’ll do before I leave — even if I won’t get to see the garden come back to life this year. I check my back pocket wondering, “Where are my Felcos?” My hand flexes. Spring is going to be here soon. Time to get ready.

What About Witch Hazel?

Barbara: Witch hazel, also known as winterbloom or snapping hazel, is a fascinating plant that is indigenous to the Northeast and Central United States. Its name comes from the Middle English wiche which means “bendable” or “pliable” and refers to the early settlers’ use of forked twigs from this plant as divining rods to locate water, precious metals, and lost objects underground.

Its horticultural name, Hamamelis, means ‘together with fruit’ because this plant’s fruits, flowers and next year’s leaf buds are all on the branch simultaneously. Its other names refer to its early bloom time and its habit of snapping, or spitting, its seeds far from the mother plant, a strategy that ensures a less-crowded environment for the offspring.

Witch hazel extract from the bark and leaves of Hamamelis viginiana has a long history of use as a natural remedy. Native Americans boiled the stems to create a distillate and used it for insect bites, skin rashes, poison ivy, poison oak, sore muscles, bruises and hemorrhoids. The first settlers learned about witch hazel’s healing properties from the Native Americans and in the 1870’s it began to be produced commercially by Thomas Newton Dickinson. Amazingly that brand still exists. The next time you’re in a drug store look for Dickinson’s Original Witch Hazel.