Mary Beth: Memorial Day weekend on Block Island was a busy one and if it hadn’t started to rain I’d still be out there. The reason I was so busy was that this is the year Ray and I decided to come up with a real solution to the deer problem — well, I decided and Ray graciously offered to help make it possible (encouraged no doubt by my promise of delicious home-baked goodies).
In years past I’ve relied on some temporary netting and deer repellant spray made from a recipe I learned in my Master Gardener training. These tactics deterred the deer most of the time, but I was so tired of re-spraying the veggies after watering them and of the deer trampling the plants while trying to find something that didn’t taste bad. Plus I like eating the cherry tomatoes off the vine and it grossed me out to think about the rotten raw eggs I’d sprayed on them.

We’d talked for years about a more permanent solution and a few weeks ago we finally ordered the supplies for a deer fence. Ray found some untreated Atlantic White Cedar that he had milled by a one-man shop in Massachusetts. The mill trimmed out twenty-two 4” x 4” x 8’ rough-cut posts which we set into 2-foot deep holes. We compacted the soil around the posts and then stapled 7’ black PVC 2” x 2” fencing to them.

Once we got it all set up, the posts were about 6’ tall and the PVC fencing stood at about 5’ 8”. The black fencing is great because when you look at it straight on it’s almost invisible. Ever the perfectionist, Ray decided the fence needed to be “prettied up”, so he beveled the tops of the posts. And he was right; it’s amazing how a small detail can make such a big difference.

I confess that when I first saw those honkin’ big posts in the ground I had my doubts, but it looks really nice and the fence is attracting lots of attention and more than a few compliments. (Hopefully it’ll attract some new clients for Ray as well.)

We still need to add finishing touches like gates, but the hard part is over and, with luck, I won’t have to use a posthole digger anytime soon! Best of all, it will be so nice not to wake up in the morning worrying about the damage the deer inflicted on the vegetable garden. Not that I’m wishing ill on my neighbors, but I hope the fence discourages the deer enough that they will take our property off their list of places to munch. 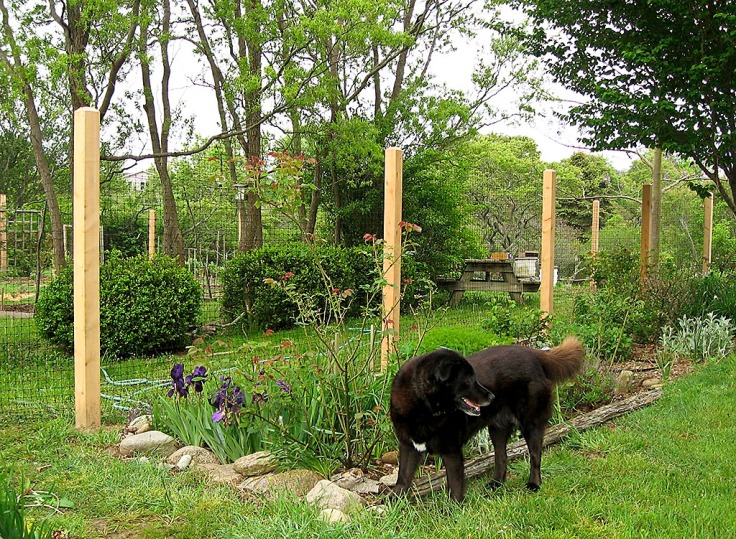 Another benefit of the fence came as a pleasant surprise. As you know from previous posts, I’m a bit of a freak and another thing I’m freaky about is feeling confined. I was a little worried that I might not like working inside the fenced area. What actually happened was the fence made me focus on the task at hand! I’m pretty distractible and if I notice something in the periphery, I’ll wander over to it and lose track of my original task. Now I can’t do that anymore. I wonder if I can apply this technique to other areas of my life? Small portable fencing anyone?

In addition to the fence project, I decided to plant out half of my tomatoes. They were getting quite large and I wasn’t sure when I’d get back into the garden. (Between the persistent rain and the backlog of clients that are eager for me to begin the season’s work in their gardens, it may be a while till I can tend to my own.) I spread out the lettuce plants in between the tomatoes and it felt great to see everything coming together.

I also planted some plants I bought for the bees: scabiosa, white salvia, baptista, more lavender, Joe Pye weed and lemon balm. Next I found the 37 dahlias that I’d stored away this winter in the cellar and put those in the ground. Then I fertilized all the roses and gave everything a dousing of fish emulsion with EM-1 mixed in. I was cross-eyed with exhaustion and shocked that it was 7 pm when I finally made it into the house. Yup, I’m so glad I took two days off from work!

My bees are generally doing well, but there was some weird thing going on with one of the frames. For the second time the bees had built a comb that bubbled out in the lower brood box and they’re able to get behind it. I took the last one off, but this one was bigger. It had lots of larvae and they seemed to really be busy on it so I didn’t have the heart to pry it off.

The bees were edgier than usual and seemed to be pissed off — maybe it was the storm that was brewing, so I closed up everything and let them be. I’ve decided to let the whole thing play out and see what happens.

The bees had really loaded up the bottom brood box. The second brood box was coming along too and they had 3 frames built out with comb. Another frame was loaded with a different color pollen. Pretty neat! Overall, I noticed there were a lot more bees. Because it was so crowded, I didn’t see the queen this time, but she’s clearly been very busy laying eggs. 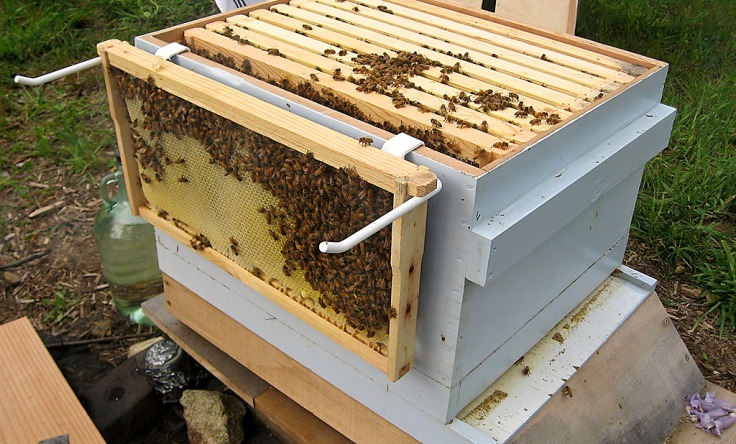 I got two new tools last week and they made it easier to handle the frames. One tool is a frame perch and the other a pry and grip tool. I recommend both of them to the beekeeping readers.

Barbara: Traveling and work demands have left a big gap in our blog, but I’m happy to be back with some time to catch up.

There’s not a whole lot happening in the garden. Our weather has been pretty gloomy between “real” clouds and the persistent marine layer. My natives seem fine, but I think they’re sulking about the lack of sunshine. They’re bound to start growing when the sun returns. Of course, by then the heat will be blasting, and I’ll have to remember to be sure they get enough water this summer. Mary Beth tells me that the number one reason drought-tolerant plants fail to make it in the first year is that they don’t get enough water because these plants aren’t truly drought-tolerant until they get established. Of course, the number two reason they don’t make it is because of too much water. I’ll just need to pay attention and get this mix just right.

This weekend I went to the nursery determined to stick to just returning something I didn’t need. How may of you want to guess what happened next? Right. I came home with more plants. Sigh.

At least I was a little more selective than usual. I have a little atrium where I decided to try to grow herbs for cooking and garnishing. The nursery had a nice selection of organics that should do well in part shade and I chose plants that bees like. I bought lemon balm, lovage, German chamomile, purple sage, and onion chives. I’ll also plant two “bee pots” — containers of plants that bees love — in a sunnier spot. For those, I got hyssop, which smells amazing, and borage. That should make the little wild foragers here in Irvine happy.

15 thoughts on “Deer Fencing and Other Spring Happenings”